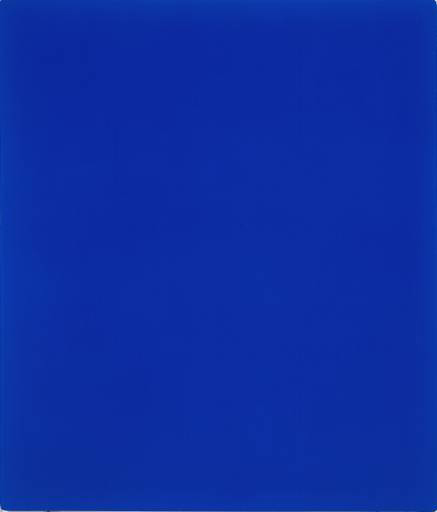 The sculpture exhibition at Tate Liverpool is a great show for dipping into from time to time, it’s good to focus on one area rather than trying to take in the whole two floors in one session. I had forgotten that this was in it and I’m not quite sure why it is as it’s not something one would normally describe as scultpure. I do love it though, blue is supposed to be a cold colour but I find this uplifting. Not this small blue rectangle on the screen but when standing in front of the actual large painting in the gallery.

In 1947, Klein began making monochrome paintings, which he associated with freedom from ideas of representation or personal expression. A decade later, he developed his trademark, patented colour, International Klein Blue (IKB). This colour, he believed, had a quality close to pure space, and he associated it with immaterial values beyond what can be seen or touched. He described it as ‘a Blue in itself, disengaged from all functional justification’. Klein made around 200 monochrome paintings using IKB. He did not give titles to these works but, after his death, his widow assigned a number to each one.
(From the display caption November 2005)

Artwork of the Week – Francesco Primaticcio

Artwork of the Week – Jon Fawcett

Artwork of the Week – Donna Berry