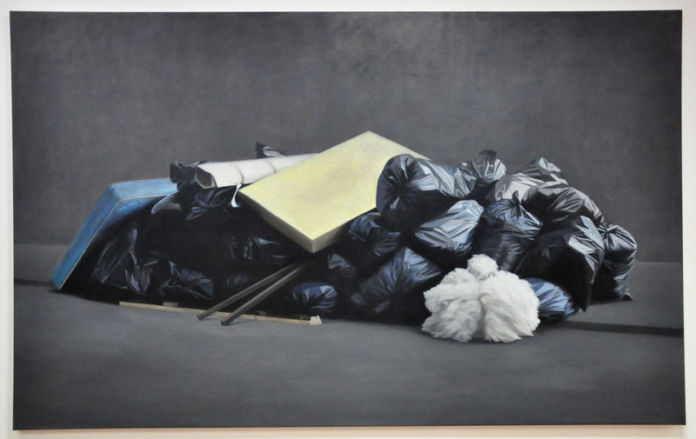 One of a few excellent large paintings on the 1st floor of the old Rapid store on Renshaw street above the Visitor Centre.

Tim Eitel’s name is generally associated with the New Leipzig School, named after the eponymous celebrated art academy. The School, a movement originating during the 1990s in East Germany, consolidated over the course of the last decade and has now achieved international recognition. Throughout his career the artist has been exploring different pictorial genres, variously concentrating his attention on isolated or small groups of figures, natural and built landscapes and interior spaces.

Throughout his career the artist has been exploring different pictorial genres, variously concentrating his attention on isolated or small groups of figures, natural and built landscapes and interior spaces. Although Eitel considers painting as a counterpart to the fast consumption of media-generated aesthetics, he is nevertheless interested in understanding what type of images are retained by our minds from the overwhelming flood of mass communications, especially if they are associated with powerful affects, such as fear or desire.

Eitel’s process generally starts with a photographic documentation of his surroundings. During this phase he crystallises his impressions by taking snapshots of compositions that unexpectedly attract his attention. He then extracts selected elements from each photograph that, once isolated from the rest of the context, become the core matter of his pictorial investigation. The sense of abandonment, alienation and estrangement achieved by means of this selective process creates a poetic tension between the ‘reality’ initially photographed and its meticulous pictorial de-contextualisation. Eitel’s almost Caravaggesque depictions of the humanscape that populates the least noticeable parts of the city are at once moving and detached. They refuse to indulge in any form of pietism and resist shifting into pure political propaganda.

The three large paintings presented in The Human Stain section of Touched are powerful exemplars for the artist’s research: abandoned mattresses, garbage, supermarket trolleys and a desolate humanity are recurrent themes in his analytical depictions. The anti-heroic penumbra that permeates his work and dwells in his canvases addresses a defeated society. There is no paternalistic or patronising attitude in his attempt to capture beauty in this derelict underworld. Rather, by isolating and elevating to sovereignty in his paintings precisely what we try to remove from our sight, the artist embraces an empathetic vision that refrains from expressing judgement.

Artwork of the Week – Sascha Weidner