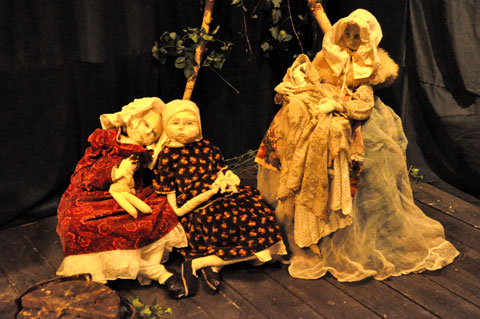 Liverpool artwork of the week 2010-44. ‘Tales From the Woods’ by Teresa Wilson at Arena 28 October – 14 November 2010, part of the Cooperative strand of the Liverpool Biennial.

This is the 3rd exhibition at Arena during the Biennial. Sadly we missed the first one ‘Neither/Nor‘, we did see the excellent second one ‘Process‘ by Beverley Bennett but I was unable to find time to write about it.

If you have been to Arena’s small gallery space you will understand why I was concerned that adding a few more characters to the room could make human navigation difficult. So we arrived early and entered the wonderful dark woodland world, it’s not like being in a gallery at all, the room has been darkened and a scene created with Teresa’s puppets inviting us to imagine the story being portrayed.

Tales from the Woods – Teresa Wilson
28 October – 14 November 2010
Teresa Wilson
is an installation artist working within the space between sculpture, poetry and theatre. Wilson’s macabre puppets, made from rags and recycled materials, use imagery from fairy tales, poems and plays, to create darkly theatrical and claustrophobic environments where private dramas take place. The characters within the installations appear to be revealing a story to the viewer, but they are insubstantial, fragile and ghost like, so that their reality does not seem to relate to our reality, but to somewhere else.

‘Tales from the Woods’, is a new enigmatic work by Wilson, combining pieces from her cast of ‘characters’ with new site specific work. The installation looks at traditional fairy tales within the context of the historical building in which Arena Gallery is housed. Charming on the surface, fairy tales have a darker subtext, relating to our own human fears and anxieties. Upon entering, the viewer is invited to explore a darkly playful alternative reality, and to let it take them on their own emotional and imaginative journey. Artwork of the Week – Stuart Cairns

Artwork of the Week – Allofusarelost

Artwork of the Week – Auguste Bonheur