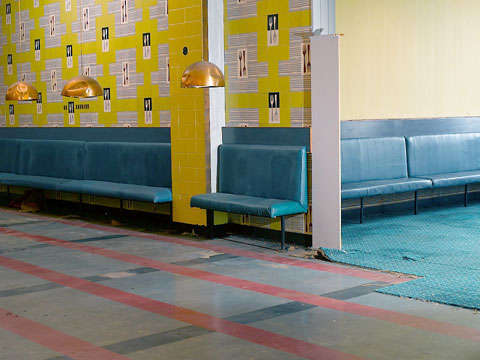 One of my favourite’s from the excellent exhibition of photographs of the deserted 5th floor of Lewis’s. The store closed last week but this exhibition continues to the end of August. I think this image captures the result of neglecting what was once cutting edge design. Lewis’s could have kept it looking nice and functional, made a feature of it even.

This  exhibition of photography taken in Lewis’s, one of the UK’s oldest and most iconic department stores, reveals a world that has been hidden since the early 1980s.

The fifth floor, with its hair salon, cafeteria and restaurants, was the epitome of style in the 1950s. Three decades later the entire floor closed to the public and it has been used for storage since then. Local photographer Stephen King has beautifully captured the faded glamour of this lost world, including many of the original features.

Now largely empty, the floor was once a bustling hive of activity. In addition to stunning views of the interiors, the exhibition includes a series of portraits of current and ex-employees in their original place of work, with reminiscences of life at Lewis’s during that era. Their presence injects life into the spectral setting of the now deserted floor.

Also included in the exhibition is an artist documentary filmed and produced by Jacqueline Passmore. The film examines the impact of Lewis’s heyday through interviews with staff from the fifth floor.

The exhibition has been developed by Neutral Spoon art project management, supported by The National Lottery through Arts Council England.

Artwork of the Week – L.S. Lowry

Artwork of the Week 21

Artwork of the Week – Beyond the Boundary

Artwork of the Week 34