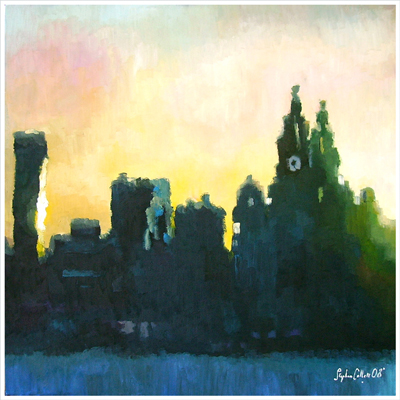 The “Cities”  series, which depicts nine of the world’s great metropolis’s, was developed by Collett in 2008 as a response to Liverpool’s year as European Capital of Culture.  He says of the concept:

“Our Capital of Culture year gave every artist in Liverpool the chance to produce pieces of work which signified our pride for our city and this is how I see Liverpool, a thriving cultural capital which sits comfortably amongst the great cities of the world…

I wanted these pieces to be recognisable as cities from a distance, yet up close they were slightly abstract and very impressionistic. This is indicative of any cityscape in my opinion, the dominant landmarks forming iconic skylines making every building work in the composition, yet not specifically painting every individual building.”

The collection was exhibited in three locations in 2008 and was viewed by over 10 000 people. After a successful year which included solo shows in Liverpool, London, Berlin and New York, Stephen approached dot-art with the idea of auctioning the collection in aid of charity, as a way of both celebrating the success of 2008 for the artist and the city as a whole, and to benefit a range of worthy causes who are struggling in these uncertain times.

All profits from the sale of the collection of nine paintings will go to the following charities, personally selected by the artist:  The Painting Project in Rio, The Bedford Road Community Centre, Age Concern and Macmillan Cancer Research. Three additional paintings, all depicting Liverpool have been created specifically for the exhibition, and will also be available to buy.

The entire collection will be available to view at dot-art, 16 Queen Avenue, Castle Street from the 2nd February – 2nd March, and online at www.dot-art.com.

Artwork of the Week – Hollywood Homeless

Artwork of the Week – Stanley Spencer