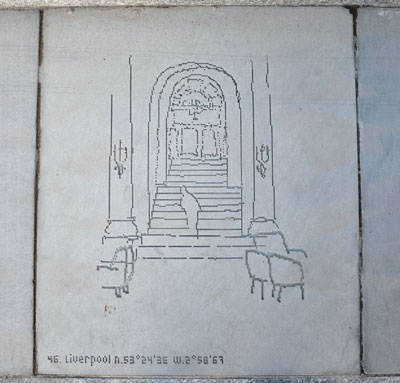 Liverpool artwork of the week 2010-17. ‘Liverpool to Liverpool: Chronicles of an Aimless Journey’ by Simon Faithfull. permanent public artwork at Lime Street Station.

Commissioned with the support of Liverpool Biennial, the 181 drawings are etched into the york stone paving and the glass panels that form the new frontage to Lime Street station. Most of the pieces were unveiled last week and we attended the launch event at St George’s Hall where the artist gave an entertaining and interesting talk about the project.

He started by relating the tale of one of the world’s top singer / songwriters who grew up in Liverpool on the river Mersey, who had a troubled childhood but bought a guitar when he was young and went onto stardom. This of course was Hank Snow the top Country & Western singer who grew up in Liverpool, Nova Scotia the destination for Simon Faithfull who traveled there as a passenger on a container ship from Liverpool, England in 2008.

The new ‘Gateway’ to the station is looking good, much better than the old one and this artwork adds extra interest as you make your way up the steps or ramps.

Traveling by container ship, train and bus, 181 digital drawings record the daily details of a journey from Liverpool (UK) to Liverpool (Nova Scotia). Making an average of six drawings a day, the minutia and randomness of travel is described in a way that builds to become an elliptic graphic essay – describing the dislocation of one person along the historic paths of trade and exodus.

As well as the public artwork there is an accompanying book that collects drawings and writing from the journey togther. Liverpool to Liverpool: Chronicles of an Aimless Journey Artwork of the Week – Laura Baxter

Artwork of the Week – Magdalene Odundo