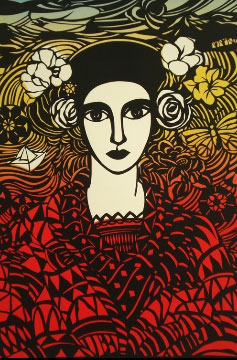 This exhibition finishes at the end of this week.

“Large screen print of a woman with adorned in flowers looking out at the viewer. There is a butterfly representing the transience of life and a boat to symbolise the journey we all undertake. There is a thoughtful sadness about the piece which could be read in a myriad of ways not least as a decorative expression of the seasons. The image is also in an edition of silver grey printed in black which is equally as strong. Edition of 5 each.”
Text from the artist’s website where you can see a lot more of Sharifa’s work.

Winter Blues 5 at Eggspace
3 December 2010 – 16 January 2011
Winter blues is now in it’s fifth year! Each year has been a successful exhibition in the run up to Christmas, consisting of work by many artists from around Liverpool and beyond.

This year will be no exception, with an exhibition of work by nearly forty artists. the egg is filled with exciting and affordable artwork in a range of different media.

Artwork of the Week 22

Artwork of the Week – Daniel Bozhkov

Artwork of the Week – Nancy Davenport