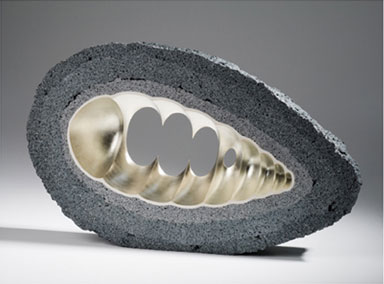 Liverpool artwork of the week 2010-37. ‘EarthGrip’ by Nicholas Lees. Prizewinner of the National Sculpture Prize at the Bluecoat Display Centre. 13 August – 25 September 2010.

The winner of the National Sculpture prize was announced at the Bluecoat Display Centre on Friday 10 September. The overall winner with a cash prize of £1000 is Nicholas Lees and the People’s Choice award went to Nicholas Moreton.

‘The National Sculpture Prize 2010’ is the second installment of the Art Prize created by the Bluecoat Display Centre to hunt out innovative new artists and makers. Following the success of our competition in 2008, and with the support of Malthouse & Co Chartered Accountants, the 2010 edition of the competition seeks to find six artists, whose work is new, exciting and thought provoking.

Nicholas Lees uses a combination of slipcasting and handbuilding techniques so that his work creates expressions of both tension and resolution. He focuses on the relationship between ‘artificial’ (something mechanical or manmade, ordered or hard) and ‘natural’ (that which is organic or soft, disordered or accretive).

Nicholas has started to use digital production to develop his work – employing a combination of free hand drawing, 3D CAD and rapid prototyping in conjunction with established ceramic techniques. This in turn creates new forms and further develops the themes in his work. His processes seek to challenge and subvert the viewer, as the final form is only evident as a ‘void’. There is a sense of capture, fossilisation and of cross section, which is of key importance to Nicholas.

“The spiral has become a key form, as well as image. Technically it allows me you create complex, undercut internal spaces, and visually allows me to reference forms of growth and jet turbines in conjunction”

Nicholas was an award winner at the 1st prize European Ceramics Competition,in Greece in 2004. He also gained third Prize in 53rd International Ceramic Art Competition, at the International Museum of Ceramics, Italy.

Artist of the Week – Sol LeWitt