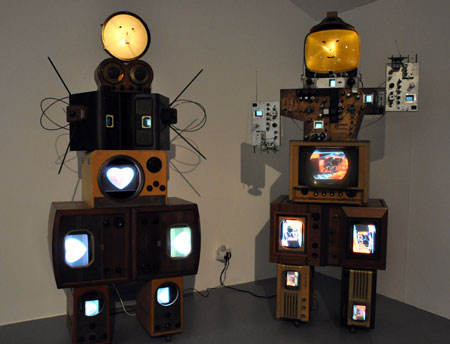 Actually two artworks and part of a larger series as there were also grandparents and children. Only a small part of the excellent and fascinating retrospective across both Tate and FACT Liverpool galleries.

The humanisation of technology is a theme that runs through most of Paik’s work but it is shown most clearly in this ‘Family of Robot’ series. made up of ‘parents’, several ‘children’, ‘grandparents’ and an ‘aunt’ and ‘uncle’. The family members were composed of multiple televisions which reflected the generation of the robot.

Although static, they are animated by the videos played on the televisions.

Text from the exhibition statement.

Artwork of the Week – Melanie Tomlinson

Artwork of the Week – Yves Klein

Artwork of the Week – Lord Leighton

Artwork of the Week 33