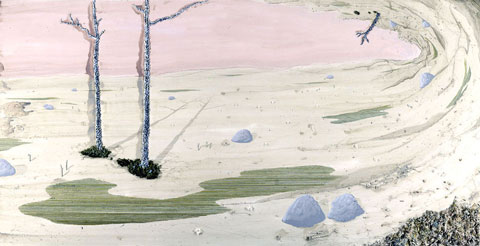 Liverpool artwork of the week 2010-36. ‘Mirage’ (Acrylic, thread and sequins on linen, 1999) by Michael Raedecke in the John Moores Prizewinners 1957-2006 exhibition at the Walker Art Gallery.

This year’s John Moores prize exhibition starts soon and I’m reminded how much I enjoyed just sitting in this room at the Walker studying and appreciating all the past prize-winners. This one in particular, as I didn’t really remember seeing it before despite it being very big and eye-catching.

Raedecker’s distinctive paintings employ an inventive range of media, influenced by his study of fashion as an undergraduate. He wittily uses threads for areas where paint would be expected: horizontal lines of thread create shadows, and balls of looped, painted thread add texture. His combination of a flat painted surface with intricate tactile embroidery, all in murky earthy tones, results in an unsettling atmosphere.

The warped land curves back in on itself enveloping the sky, further adding to the bleakness of this desolate landscape. Raedecker was born in Amsterdam and studied there and at Goldsmiths College, London. He expressed ‘real surprise’ on winning and considered putting the prize money towards buying a house. Since winning the John Moores he has exhibited regularly worldwide.

Artwork of the Week – David Goldblatt