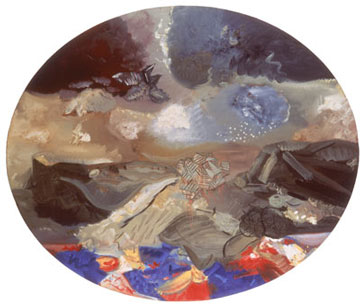 I don’t recall seeing this before, it’s featured on the Walker website as part of their Winter Online exhibition where you can zoom in for a close up of the images.

‘Winter’ is the first painting of Cockrill’s ‘Four Seasons’ series. The idea of tackling the subject went back to the mid 1960s, when he taught at St Helens School of Art. He gave his students an exercise of filling a circle with the colours they associated with the seasons, an idea suggested by a section on colour expressionism in Johannes Itten’s book ‘The Art of Colour’. Cockrill said:

“I’d be fascinated by what they did, and it left me with the unanswered question: how would I do it myself.”

After an unsuccessful attempt to paint a Seasons cycle in 1986, Cockrill returned to the theme in 1990. He painted each season on an oval canvas, the first time he had used that fomat in a major work. Much of the ‘Four Seasons’ series is concerned with the cyclical processes of germination, ripening and decay. The shape was critical to this concept, recalling the shape of an egg, symbol of birth and fertility, and also the elliptical trajectory of the earth round the sun as it moves through the seasons.

At the outset Cockrill wanted to concentrate on the theme of seasonal weather for the series. All four works retain strong weather imagery, with snow falling in ‘Winter’. A rich belt of primary colours pulses gently under the earth at the bottom of the canvas, unthreatened by the harsh weather and unforgiving landscape above it. This promise of regeneration is key to Cockrill’s view of the timeless and optimististic processes of the changing seasons.

Artwork of the Week – Anne Collier

Artwork of the Week – Leo Asemota

Artwork of the Week – Terry Duffy