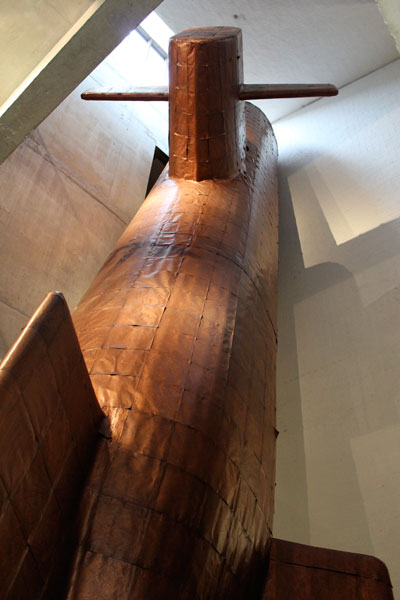 It’s not often you see a 12 metre submarine standing on its end in a gallery, especially one made from hand drawn panels. The rest of the Underwater exhibition is interesting too.

Mark Anstee’s Removed and Destroyed Without Warning (RADWW) is a drawing made from wood, cloth, paper and metallic wax. Using the full height of the Bluecoat’s Vide space, this archetypal submarine is positioned diagonally ‘nose-up’ as if trying to surface for air.

Around 375 million years ago, our ancestors crawled out of the waters…Underwater is about the experience of total submersion; we invite you to return to the watery depths once more.  From a wealth of possibilities, this exhibition brings together the most compelling underwater-inspired artworks of the past decade, and proposes that the underwater is a compelling motif of our times.

The show includes three mesmerising videos.  In the first, by Bill Viola, two lovers intertwine as they slowly descend into dark waters, exhaling their last breath together.  In Janaina Tschäpe’s video a woman’s head rocks from side to side, just beneath the water’s surface; she is in a trance, or dreaming, or perhaps sexually aroused.  And in a video by Dorothy Cross, we see a woman wafting in sunlit water that teems with jellyfish, her hair billowing with their pulsating forms.

A drawing by Ellen Gallagher conjectures a monstrous creature that has evolved in the far depths – part natural history specimen, part science fiction.  Other drawings by Ed Pien suggest a nightmarish underwater realm, in which ghastly creatures do battle.  In Daniel Gustav Cramer’s photographs the seabed is deathly and ominous: there are towering rocks, rising silts – it is a microcosm of barrenness and decay.
On the other hand – straight from the pages of Jules Verne – a motorized model submarine by Cut and Scrape lurches about in the clutches of a giant squid.  Meanwhile, tapering metallic sculptures by Klaus Osterwald, suspended as a shoal from the ceiling, emit the strange chirrupings of fish, as recorded by underwater microphones.

Shirley Kaneda’s paintings are concerned with the state of liquidity – her precise yet free squiggles are a play on refraction and reflection.  Seunghyun Woo’s sculptures of imaginary aquatic flora and fauna likewise suggest liquid movement and distortion.

The underwater is seen here as a metaphor for the unconscious: it represents another state, beyond ourselves, but also within us.  It is death and the womb, freedom and dread, innocence and despoilment.  In a wider sense, too, the artists in Underwater manifest the anxiety many of us share about this watery, life-filled planet and the threats it faces from humans.

Sara-Jayne Parsons, Exhibitions Curator at the Bluecoat said: “The exhibition brings together a selection of intriguing works that capture or suggest the sound, colour and space of the underwater world. And alongside Underwater we are thrilled to present RADWW. We’ve enjoyed helping local artist Mark Anstee realise his ambitious and unusual project. I doubt visitors to the Bluecoat will ever have seen a drawing quite like this one!”

Artwork of the Week – Tom Palin

Artwork of the Week – Laurence Payot

Artwork of the Week – Mark Rothko

Artwork of the Week – Richard Higham