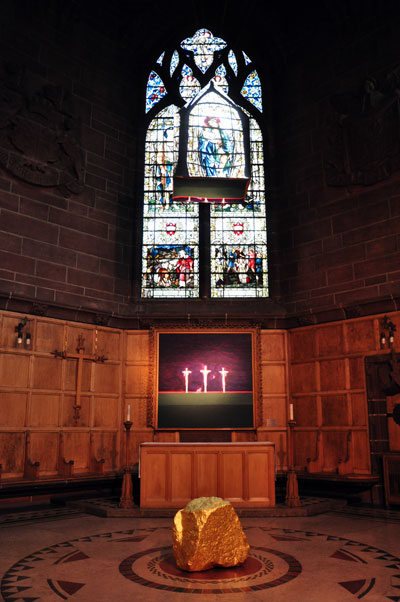 This fascinating installation with its house-shaped reflective structure hanging from the roof is in the Chapter House which is normally locked but you can see through the gates.

Liverpool Cathedral welcomes back Lin Holland and Jane Poulton its artists-in-residence from 2008 with a new installation that is open to interpretation and debate from faith and non-faith perspectives.

During their residency Holland and Poulton created several pieces that were sensitive to the fabric, architecture and purpose of the Cathedral.

The new work, commissioned for The Chapter House, titled Earth and Aether, uses a variety of evocative materials including gold, mirror and red sandstone – the material from which the Cathedral is made.

Through its use of materials and forms – chosen for their physical, aesthetic and symbolic relevance in a religious setting – the work illustrates man’s attempts, through the sanctification of earthly objects, to approach a sense of the sublime.

Artwork of the Week – Yayoi Kusama

Artwork of the Week – Janek Schaefer

Artwork of the Week 43