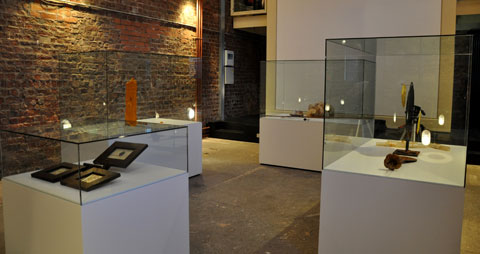 This really interesting exhibition at Metal ends this week, take the train and get off at Edge Hill.

Incorporating fragments and found objects recovered from the renovation project at Edge Hill station during his residency with influences from the project’s first phase developed in response to his experience in Liverpool, Leo Asemota’s The Handmaiden is an installation for Edge Hill Station to mark the second phase of the project. This exhibition is part of Liverpool and the Black Atlantic, a series of exhibitions and events that explores connections between cultures and continents.
Contained in four vitrines and governed by three drawings on vellum with lead, coal, orhue (kaolin), palm oil and beeswax, the creations unravel from myth, folklore and contemporary history, the origins of “The Handmaiden”, a being central to the completion of “The Ens Project”

Leo Asemota came into residence at Metal, Liverpool in July 2009 to advance his longstanding work ‘The Ens Project’. Primarily informed by the Edo people of Benin’s ancient ‘Igue’ ritual of Head worship, the British Empire’s invasion of Benin in 1897 and the essay “An Artwork in the Age of its Technological Reproducibility” by the late German philosopher Walter Benjamin, the first phase of the project was concluded in 2008 with a sequence of performances in London: “ens memoralis” at the National Portrait Gallery and “The longMarch of Displacement” along the Victoria Embankment and at St. Paul’s Cathedral.

Artwork of the Week – Maxine Shisselle

Artwork of the Week – Andy Plant