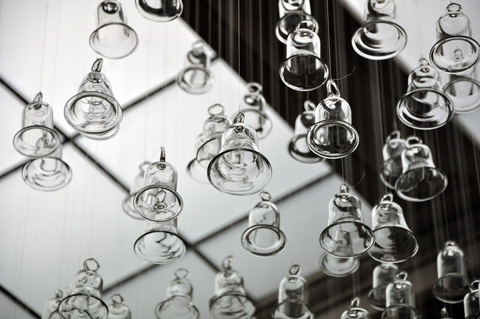 I have already written about this lovely installation here.

Sound moves between loudspeakers in the Grade I listed building, unveiling an ancient legend about a temple of a thousand bells that was built on an island. Over the centuries, the island sank into the ocean, and with it, the temple. As the story unfolds, it reveals the attempts of a sailor to hear the music of those bells. The narrative is interspersed by specially composed music and sound effects.

The one thousand bells of blown glass will hang from the roof of the Oratory, to complement the fine classical architecture of the space. The bells are without clappers – the only sound will come from the recorded audio: a visual metaphor to match the narrated legend of the lost music of the bells in the depths of the ocean. The mass of clear, translucent glass bells will evoke water, notions of spirituality, fragility and evanescence. They may also suggest lyricism, dreams and imagination.

The thousand glass bells have been made at one of the UK’s few surviving traditional glass blowing workshops, the Glass Blobbery in Corwen, North Wales.

Artist Laura Belém said, “My intention is to show a work that can touch the viewer’s ‘inner self’ – heart and soul – something we share universally and that transcends geographic and cultural boundaries. I am also interested in altering or creating other levels of perception of a public space for people in Liverpool.”

Artwork of the Week – The Kiss

Artwork of the Week – Imogen Stidworthy

Artwork of the Week – Adele McMahon