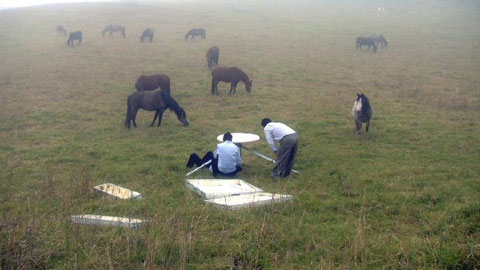 I like the images in this video which was shot in Ecuador but also the sense of mystery. What are these guys doing? Is it the secret service up to something, a scientific experiment, some cultish behaviour or maybe just a strange picnic. And even though all these objects are here in the gallery we still can’t figure out what they do.

(Text from A Foundation..) Fawcett’s use of extensive research into tropes of conspiracy and media cults have allowed him to bring into focus the fuzzy logic of new age mysticism that is proliferating in the era of networked consciousness. His sculptures, video and performances exude a menacing technical precision and seduce with a spectrum of alluring colours but these are aesthetic camouflage to cloak ideas that question the nature of the mediated reality or as the artist says, ‘a fabric of contemporary mythologies.’

In this delicate weave in which ephemeral ideas become locked into the history of material technologies from surveillance drones to kevlar weave, the artist uses strategies that simulate those which have become common in the uncanny world in which we live, paralleling activities such as business, politics and war, and operating on a dispersed, global scale.

Jon Fawcett: Hearts and Minds
at A Foundation

2 July – 14 August 2010
The works of artist Jon Fawcett exhibited in the Blade Galleries are a series that test the interfaces between the boundaries of artistic production, dissemination and reception.

Artwork of the Week – Jun Takita

Artwork of the Week 38

Artwork of the Week 35

Artwork of the Week – Michael Raedecker