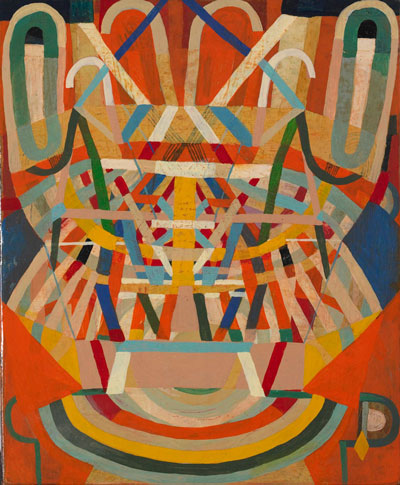 A reminder that although the Biennial has now finished, the John Moores exhibition continues until 3 January 2011 and includes one of our favourite Liverpool artists – Jason Thompson.

My paintings are usually made of many layers. Each new layer continues, contradicts or buries the previous layer. I try hard not to start out with any ideas or particular intentions but I’m sure this is not possible. The gaps in time between layers mean that I get distracted. I lose my thread, but pick up another when the next layer starts. Maybe it’s more accurate to say that instead of  having no ideas the painting is filled with dead ones.

Parts of the painting are copied, mirrored or echoed in other parts. These copies are then re-copied and so on, again and again. Structures are formed by this feedback process and it is as though the painting begins to paint itself. I like to imagine all this is analogous in some way to the natural evolutionary processes by which living things are formed and consciousness is developed. This is probably an illusion but that may be the point.

Jason Thompson was born in Liverpool in 1970 and currently lives and works there. He studied painting at Chelsea College of Art and Design London both for his BA (1990-93) and MA (1993-94). He was shortlisted for the ‘Swiss Bank Corporation European Painting Prize’ 1994. He has had works in several group shows including ‘TEN Loop Gallery Liverpool (Liverpool Biennial) 2004 and ‘Overview’ at Cornerstone Gallery Liverpool 2007.

Artwork of the Week – Roozbeh Rajaie

Artwork of the Week 46