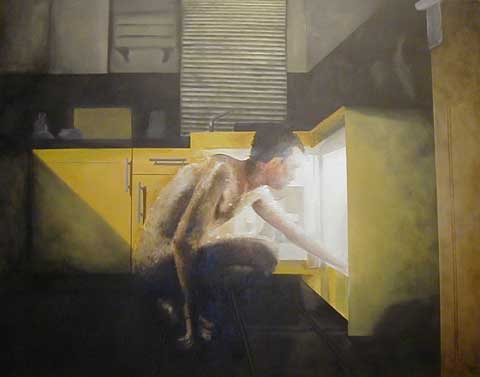 ‘Fridge’ is one of many large paintings in this excellent show of figurative work by Jason which also includes preliminary sketches. Its a fascinating idea, a series of paintings of the naked male in contemporary settings such as, here, in the kitchen or brushing his teeth, reading the paper etc.

And the method of creating a sort of fuzziness is something I haven’t seen before, excellent technique. They’re all acrylic on canvas and for sale, take a look.

‘Self Observed’ attempts to re-evaluate the typical male within contemporary painting. Drawing on aspects of the pressure and stress of modern living, work, emotional, sociological and psychological interaction, the works explore the tension and conflict that can exist, but is not necessarily seen, between the body/self and external forces, stimuli and physical surroundings.

The compositions document the relationship between the role of the modern male – his aspirations and expectations, his rapport with modern living and everyday objects – and that sense of self, both physically and psychologically. A constantly liquid shifting and tense dialogue between these two entities, seemingly irreconcilable positions provides an interesting study for context, composition and technique. Each title in  this theme reinforces a pragmatism and mundanity in the work’s individual narrative, almost sidestepping the unrepresented silent majority within the male gender.

Jason Jones – ‘Self Observed’ at the Cornerstone Artwork of the Week – Cao Fei

Artwork of the Week – Jason Thompson