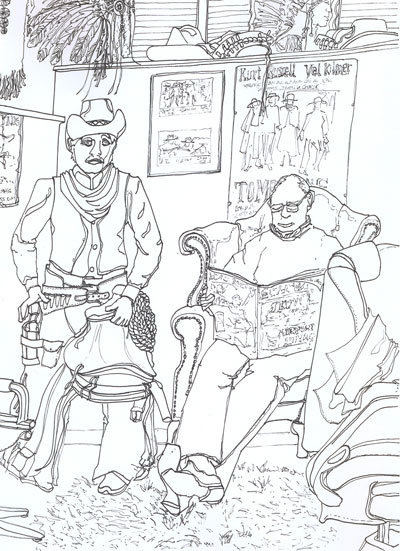 Yes, there’s a cowboy-themed barber shop on Wavertree Road! But probably not for much longer as it’s due for demolition along with the few remaining business there. It’s great to have this record (Jane has written notes, unwanted receipts and other bits) of the final months’ activities in this interesting, independent area.

On the Edge
“On-site drawing is at the root of my artist practice. For a number of years I have been working on self-initiated documentary drawing projects, two of which were based in local university Art and Design departments (Liverpool John Moores University, and Liverpool Hope University, where I was artist in residence).

My current drawing investigation, begun in the summer of 2010, involves the documentation of life in a number of doomed small business premises on Wavertree Road in the Edge Hill area of Liverpool.
Following plans for the regeneration of Edge Hill, large swathes of this area have been cleared prior to the planned building of new houses. One consequence of the plan is that many of the long-standing traditional small businesses based in unique premises will be lost forever. Only a handful of the traditional rows of shops remain on the city end of Wavertree Road. Many of the premises are now abandoned and permanently shuttered, but scattered in between, a few small businesses still currently thrive, clinging on at the edge of the demolition area.

I am currently documenting activities in the eleven or so shops that still remain. These include a cafe, a general store, four hairdressers, a dress shop that has provided smart gowns to Liverpool ladies for nearly sixty years, and a garment alteration shop that has been forced by impending demolitions to move three times over the course of 15 years.  Their existence is now so precarious that their leases are only being renewed on a short-term basis.” Artwork of the Week 23

Artwork of the Week – Cao Fei