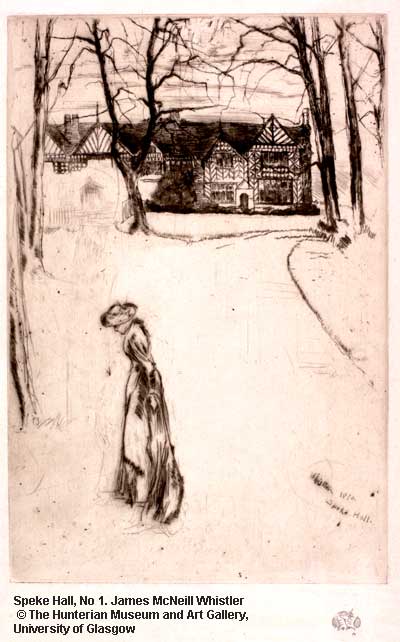 Did you know that Whistler made several visits to Speke Hall?  It was the country home of his ship-owning patron Frederick R Leyland.

In 1870 Whistler made this etching of Mrs Leyland standing in the driveway in front of the mansion. This image was created when Whistler’s interest in etching was renewed and shows the influence of Japanese prints.

This fascinating exhibition gives remarkable insights into the etchings of American artist James McNeill Whistler, one of the greatest artists in his field.

Featured in the exhibition are 34 exquisite works from the period 1854 to 1893, drawn from the University of Glasgow’s world-famous Whistler collection.

Although now best known as a painter, Whistler’s reputation was originally founded on his skills as an etcher and the exhibition explores his etching techniques. During his career he produced some of the most technically innovative and beautiful etchings of his day.