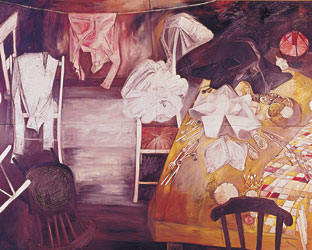 Liverpool artwork of the week 2010-19. ‘Creation and Crucifixion’ by Jack Smith in John Moores Prizewinners at the Walker Art Gallery until end 2010

We were in the Walker Art Gallery a few days ago to see Emma Rodgers new sculpture and strayed into the room housing this exhibition of the JM prizewinners from 1957 to 2006. It’s a lovely exhibition featuring some great artists and some fascinating documentation and photographs in the display cabinets.

Sheffield-born artist Jack Smith became the first John Moores winner with this painting. At the time he was linked with ‘Kitchen Sink’ realism: domestic interiors littered with everyday objects; earthy and rather sombre colours; the suggestion of a rough and-ready assemblage. But Smith was not interested in depicting real life, saying, “My concern at that time was to make the ordinary seem miraculous.” He conveys this here largely through the handling of light, bathing the contents of the room in mystery. This anticipates his later development towards geometrical abstraction and how the effects of light transform the shapes we see. When he won, Smith was a part-time art teacher finding it impossible to live on the sale of his paintings. Of the £1,000 prize money he said, “It means I shall paint for a short time on canvas instead of hardboard.”

“This work was a summing up of the previous four years’ paintings. Many of the objects had already been explored in other paintings. After this work I moved on to other areas of exploration. By 1959 my work had become abstract.

The prize money [£1,000] made a lot of difference. I was able to buy more expensive colours and the bank welcomed me with smiles.”

More details about the exhibition

Artwork of the Week – Doug Jones

Artwork of the Week 29

Artwork of the Week 28