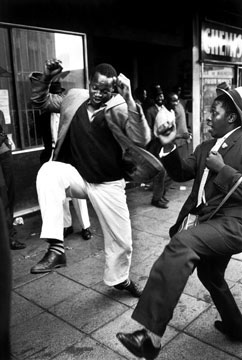 In 1960 the African National Congress (ANC) and Pan Africanist Congress (PAC) were banned. The ANC formed a military wing, Umkhonto we Sizwe (Spear of the Nation). Nelson Mandela, as chief-of-staff of Umkhonto we Sizwe, started a sabotage campaign in December 1961. Two years later the ANC headquarters, on a farm at Rivonia, were raided and members arrested. The resulting Rivonia Trial banished several ANC leaders to life imprisonment on Robben Island, including Mandela. Both organisations were forced underground.

Opposition in South Africa continued from anti-apartheid leaders such as Bishop Desmond Tutu, who received the Nobel Peace Prize in 1984 for his non-violent struggle. Steve Biko, campaigning under the Black Consciousness Movement (BCM), was murdered in police custody in 1977. There was growing international pressure against apartheid, including a United Nations resolution, political and economic sanctions and a widespread boycott of South African sporting teams.

UPDATE: The Slavery Museum is on 3rd floor of the Maritime Museum BUT this exhibition is rather large and is in the 2nd floor gallery

Artwork of the Week 42

Artwork of the Week – Dream by Juame Plensa