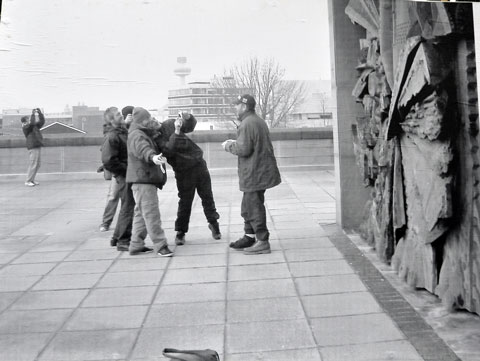 Liverpool artwork of the week 2010-9. Untitled by Anon. Photograph in ‘Hollywood Homeless’ at St Luke’s Church until 7 March 2010.

One of my favourites from this splendid exhibition on the external railings and inside the ‘Bombed out’ church.

Private View: Friday 5 March 2010 from 16.00 onwards, Performance at 17.00.
Hollywood is about image and perception, the roles that we play in life …. just like in a movie! Urban Strawberry Lunch, working out of the ruins of St Luke’s Church have been working in collaboration with photography group FAB Collective and over 60 homeless people to produce original music and photographs forming the basis of this multimedia performance and exhibition. Exhibition and performances 6 & 7 March.

Finding a voice through artistic expression can alter self image, inspiring self confidence and personal success. Becoming a producer rather than a consumer can provoke profound insights for anyone who dares to create. We hope you will come along and see what has been produced through the Hollywood Homeless project.

HOLLYWOOD HOMELESS has been made possible with the support of the EMPLOYABLE COMMUNITIES FUND – an ESF funded scheme managed by: Community Foundation for Merseyside, Merseyside Expanding Horizons and Merseyside Disability Federation.

Artwork of the Week – Stuart Cairns

Artwork of the Week 24

Artwork of the Week – Mark Anstee