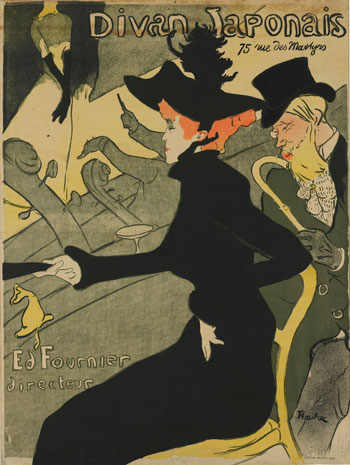 Divan Japonais was the name of a newly launched café-concert run by Edouard Fournier whose name also appears on this poster.

The dancer Jane Avril (1868 -1943) who appears in many of Lautrec’s prints dominates the image in a striking black dress and hat, with the music critic Edouard Dujardin sitting beside her.
The tops of the two double-basses rise above the orchestra pit.

On stage a back view of the figure of Yvette Guilbert (1867-1944) is glimpsed, identifiable only by the black gloves she usually wore. Guilbert also appears in several prints in this exhibition.

High Kicks and Low Life: Toulouse-Lautrec prints
at the Walker Art Gallery
14 May – 8 August 2010
An exhibition of evocative prints that portray theatrical life and studies of daily life, including Lautrec’s very personal observations of the lives of prostitutes. The exhibition includes depictions of the dancer Jane Avril and the actress Sarah Bernhardt, as well as Lautrec’s iconic poster La Goulue at the Moulin Rouge.  A British Museum Tour.

Artwork of the Week – Lord Leighton