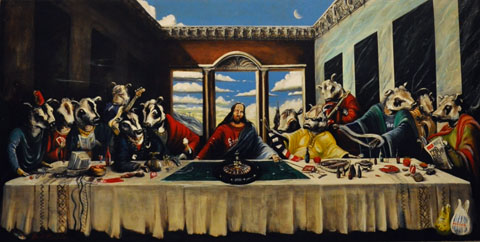 One of many amusing, allegorical, somewhat surreal paintings by Frank Maudsley the former bass player for Liverpool band A Flock of Seagulls.

Mad cows are feasting and gambling, worshipping football and shopping at ‘Fresco’

Frank still performs music but now spends most of his time painting.

Some works were sold at an auction held on the launch night with proceeds going to the Rhys Jones fund.

Frank describes his art as an ‘eclectic’ mix  ranging from abstract to portrait and the show includes a number of Frank’s more recent and highly collectible ‘Big Bang Series’.

Artwork of the Week – Allofusarelost

Artwork of the Week – Francesco Primaticcio