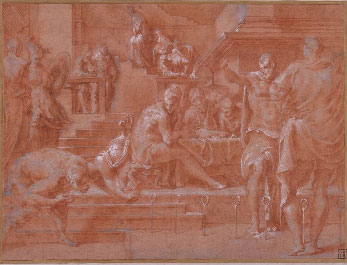 Only a few weeks left to catch this excellent exhibition of old drawings by the masters at Lady Lever.

The works in this exhibition have been chosen to show the different uses of drawing to European artists between 1500 and 1800.
At this time art students entered the workshops of established artists to be trained. Afterwards they could become masters of their own workshop if they were successful.
The artist Guercino was apprenticed to the painter Benedetto Gennari the Elder when he was 16 years old. He later established his own workshop and opened an academy for life drawing in the house of one of his patrons. It is thought that Rubens learnt to draw by copying from the work of early German masters such as Holbein and Tobias Stimmer. He was later apprenticed under Tobias Verhaecht, Adam van Noort and Otto van Veen.
Tintoretto came from an artisan family and is believed to have been expelled from Titian’s workshop as a youth. He later completed his training in Venice

Artwork of the Week – John Thomson

Artwork of the Week – James Quin

Artwork of the Week – Stephen Collett

Artwork of the Week – Donna Berry