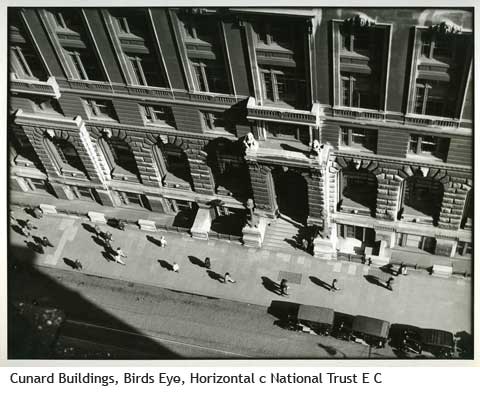 Liverpool artwork of the week 46. Cunard Buildings by E Chambre Hardman. ‘Liverpool Through The Lens’ at University of Liverpool’s Victoria Gallery in association with the National Trust, 1 November 2008 – 31 January 2009

Photograph of the Cunard Building, Liverpool, taken from the roof of the Liver Building, also titled “Watergate Street, Liverpool Birds Eye View”. Published in April 1937 and was written about in “Photograms of the Year 1937”; C. J Symes writes that this is an example of the “new angle” point of view and “creates the idea that the building is toppling forward. Possibly the moderns would regard the feature as justifiable as a natural consequence of looking down-wards, but, in my opinion, it conflicts with reality and conveys a false impression. Nevertheless, it is not without an appeal, for it contains an admirable expression of sunlight and the craftsmanship is undeniably fine”.

One of 56 original Hardman prints  – the first major showing of the photographer’s work in the city since 1994.

Hardman worked during the middle years of the last century – when Liverpool was still a thriving, world class port and ‘gateway to the Empire’.  Working in a photographic tradition known as pictorialism, he used devices such as soft focus, manipulation and retouching to create photographic impressions or moods, rather than pure documentary records – thus giving a depth and atmospheric intensity to his images.

‘Liverpool Through the Lens’ illustrates Hardman’s work at its best, capturing moments  in the busy industrial and commercial life of the city, its architectural development and  transport systems, its working people and back streets, cultural leaders and theatrical  idols – and its last flourish as a major port and shipbuilding centre.

‘Liverpool Through the Lens’ opens at the Victoria Gallery & Museum on 1 November 2008 and runs until 31 January 2009, Tues – Sat, 10am – 5pm. Admission free. For further information visit www.liverpool.ac.uk/vgm.

Artwork of the Week – Daniel Bozhkov

Artwork of the Week – Francesco Mellina

Artwork of the Week – Jason Thompson

Artwork of the Week – Mark Willcox