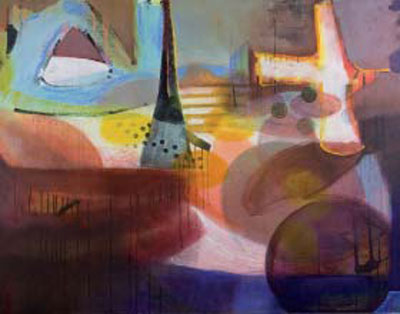 The excellent Fis 09 exhibition of works by contemporary Irish artists is curated by Eamon Colman and this is one of his paintings that appears in the show.

“As a painter. Eamon Colman is unmistakably a colourist. Not only because colour- often strong, bright colour – is a major constituent in terms of the formal pictorial construction of his compositions, but also because he expects the qualities inherent in colour to do a substantial part of the emotional work he sees as integral to the painting process.”

Eamon Colman was born in 1957 in Dublin. He is one of Ireland’s foremost abstract painters, he is a member of Aosdana and has won many awards including a one year travel award by The Calcutta Artists Union in 1989, he was the fi rst Irish artist to win a Full Fellowship to The Vermont Studio Center 2002, he is a Fellow of The Ballinglen
Arts Foundation and was awarded a CCAT Interreg Major Award to tour an extensive exhibition in Wales in 2005. He won fi rst prize in painting in EV+A 1989 and fi rst prize in painting Eigse 2001.

More viewing of his work Eamon Colman, Artist Profi le – Gandon Editions no. 25 and at www.eamoncolman.com

Artwork of the Week – Peter Dover

Artwork of the Week – Stewart Bale

Artwork of the Week – ‘Dreamer’ by Claire Burbridge

Artwork of the Week – Terry Duffy