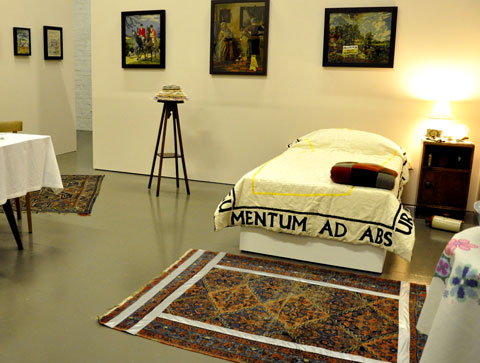 One part of this fascinating and amusing installation is the quilt on the bed.

The architectural map is a pastiche of different buildings – a prison, a museum, a shopping centre – and aptly reflects on the rules and regulations played out in public and private domains.

The use of Latin, a fading language, is a recurring motif in Jones’ work, which serves to remind us of the power of language, education, wealth and class in shaping, defining and controlling us.

For his second solo show at the Ceri Hand Gallery, Doug Jones has constructed four rooms inspired by a British Bed and Breakfast; the reception, the breakfast room, the guest’s bedroom and the private ‘back room’ of the female proprietor.

Artwork of the Week – Matthew Houlding

Artwork of the Week – Stewart Bale