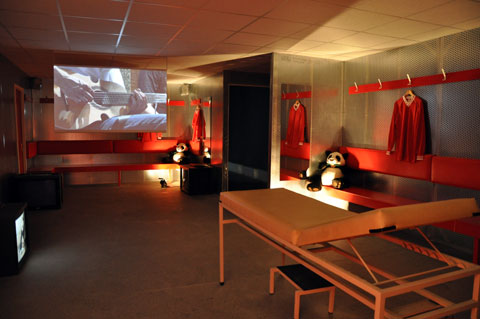 Liverpool artwork of the week 2010-40. ‘Music Not Good for Pigeons’ by Daniel Bozhkov at the Bluecoat as part of the Biennial 18 September – 28 November 2010

I like the weird mix of music, LFC, Militant, a former prison and sneezing pandas! I haven’t seen the inside of the actual Anfield dressing room but apparently it is as austere as this replica but those pandas look a lot more lively than the current players.

So for 20 minutes or so you can pretend you’re a Liverpool player watching a video which is mostly entertaining once you get past the interview with Tony Mulhearn who still speaks in meaningless slogans and sees it as his job to organise the working class – dream on Tony.

The main structure of Bozhkov’s installation is an almost to scale replica of the Liverpool Football Club dressing room in the Bluecoat’s vast gallery two space. After gaining exclusive access to the dressing room, Bozhkov was struck by how humble and austere the spaces were.  At the centre of the structure is a YouTube video played repeatedly on several monitors of a sneezing panda cub, which was viewed by over 60 million people world-wide. Then there is a music videoprojection of the semi-forgotten, but still controversial, history of Militant Tendency – a Trotzkyist group within the British Labour Party, which played a crucial role in the Liverpool City Council’s struggle against the Conservative government of Margaret Thatcher between 1983 and 1987.

Bozhkov interviewed several of these former Militant Tendency councillors, and then painted a series of frescoes inside the cells of the recently-closed Somerset County Jail in Skowhegan, Maine, recounting chapters of Militant’s story. These frescoes appear in a music video along with scenes of Bozhkov taking voice lessons in Liverpool and learning how to sing John Lennon’s Imagine with local musicians and bands, in a style changing from folk to punk to Socialist and anti-Fascist songs. Here, Bozhkov provocatively suggests that the message Lennon embedded in the song could be viewed through a more specific political lens. – Text from the Bluecoat