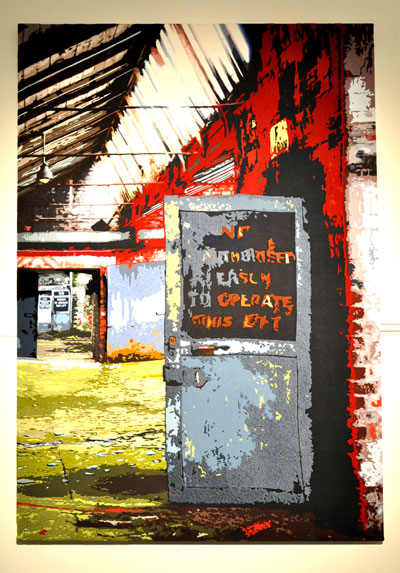 Lovely colours and textures on this large work portraying part of Stanley Dock. Clare Lane is showing a series of canvases based on Liverpool’s Stanley Dock alongside some very interesting ceramics by Dan Stafford.

The Stanley Dock has been a regular haunt of mine since 2007 when I passed the site one July with the kids in the car on the way to see the “Gormleys”. We never got there…at least not that time. I pulled up at the side of the road, and spent the next hour trying to find a way in, taking photos of what I could. Since then I have returned at intervals and negotiated access to spend hours walking the warehouses and recording its’ gradual entropic decline.

The site itself has been one in a regular state of transition since it was first developed. The original dock basin of the 1850’s was twice the width it is today. The two original warehouses were designed by the great Jesse Hartley of Albert Dock fame but their pairing was interrupted in 1901 by the arrival of the 14 storey Tobacco warehouse which spanned part of the old dock basin. This consolidated the sites industrial use and it remained this way until its gradual obsolescence from the 60’s onwards. Apparently the basement of the Tobacco warehouse was used as a mortuary during the Second World War for American soldiers prior to shipping them home.

Despite my initial thoughts on this site as one of empty dereliction, it is in fact buzzing with activity. Not the industrial activity of its nostalgic past but the various and creative use of a modern urban society. I hope my own story, one published in textiles, in some way makes its own contribution to this fascinating, lively and gritty place.

Clare records the physical environment through drawing, painting and photography, selected images are then transferred to a computer and digitally manipulated resulting in a printed textile montage. The final compositions are akin to a contemporary tapestry in both technique and visual reference.

Artwork of the Week – Bernadette O’Toole

Artwork of the Week – Carol Ramsay