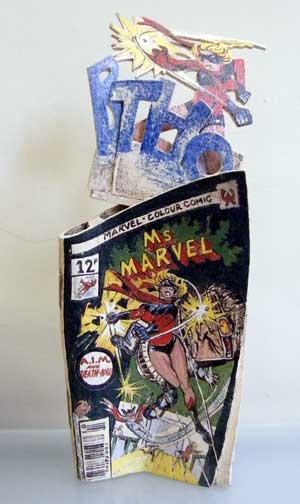 Liverpool artwork of the week 2009-10. ‘Ms Marvel’ ceramic by Brian Cook at Editions.

An amazing and odd creation by Brian Cook, one of the Sefton Seven, showing at Editions in Cook St. The show is mostly watercolours (seriously good ones too) but this is a realistics re-creation of a Marvel comic, there’s even stuff on the back page.

Seven from Sefton at Editions
6 March – 4 April
2009
Seven members of Sefton Guild of Artists – watercolourists Robert Goulden, Bernard Atherton, Rosemary Morison, John Pickles, John Ratcliffe, Ulrich West and a potter Brian Cook.
The Sefton Guild of Artists was formed in 1975 when several artists living in the North West of England decided to form a group which could concentrate on exhibitions in the region to display and sell their work.  There are currently 19 members, all professional or semi-professional painters, potters and embroiderers working to a very high standard.

Artwork of the Week – Adele McMahon

Artwork of the Week – Andrew Bracey