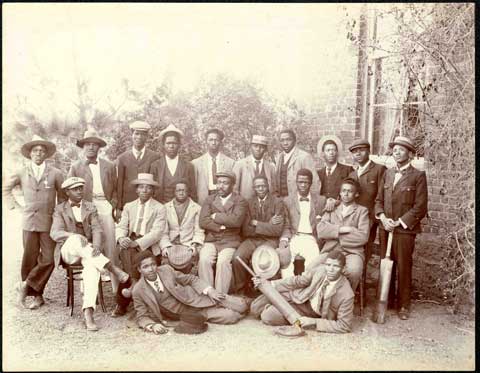 Liverpool artwork of the week 2010-14. ‘Beyond the Boundary’ photography at International Slavery Museum. 19 March – 12 September 2010.

The English cricket season is about to start – hence all the cold, wet weather, so maybe a good time to feature this small but interesting exhibition in the Slavery Museum. It may seem odd having a cricket exhibition in a slavery museum but this is in the legacy section where there are several items dealing with the prejudice and racist attitudes that still prevail as well as the positive progress made. So South African cricket and the D’Oliveira affair feature prominently. ‘Dolly’ was dropped from the English team due to tour South Africa in 1968 to appease the apartheid regime.

This image shows African scholars from English missionary institutions who were keen cricketers and made the game their own. The fathers of many of these young men where imprisoned on Robben Island for opposing the British rule.

The exhibition also features stars such as Sir Viv Richards, CLR James and Paul Adams and items from the collection of the family of Richard Benjamin, the Director of the International Slavery Museum, whose father Conrad was an accomplished player.

I interviewed Dr Benjamin at the launch of the exhibition and you can hear this on the podcast website.

Beyond The Boundary. 19 March – 12 September 2010. Exhibition explores cricket, culture, class and politics.
Beyond the Boundary is an exhibition of powerful and emotive photographs exploring aspects of cricket that have not been seen before. Beyond the Boundary explores the relationship between cricket, culture, class and politics and how it can be seen as a legacy of British imperialism and colonialism and, paradoxically, as a means of resistance against it.

Artwork of the Week – Laura Baxter

Artwork of the Week – Kris Martin