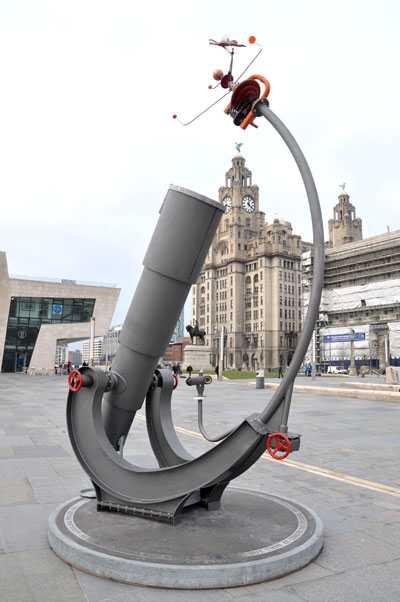 Liverpool artwork of the week 2010-12. ‘Heaven & Earth’ installation by Andy Plant at the Pier Head for Liverpool Discovers Trail until 8 May 2011.

Liverpool Discovers has been extended until 8 May 2011 though a few pieces will still only until 28 March and 1 or 2 may move to different locations. More details being announced very soon. This is one of my favourites, I think it looks great in this particular setting and is one of the more interactive pieces.

Gaze into the stars with this humorous interactive sculpture dedicated to the city’s astro-physics genius Jeremiah Horrocks.

Born in Toxteth in 1617 and living to just 22, Jeremiah discovered the Transit of Venus in 1639, pioneered astronomy in an age of ‘witchcraft and alchemy’ and was hailed as a ‘giant’ by Isaac Newton.

Enjoy a short animation through the giant telescope and learn about other facets of this incredible man’s achievements.

Artwork of the Week – Michelle Lord

Artwork of the Week 36

Artwork of the Week – Tom Fairclough