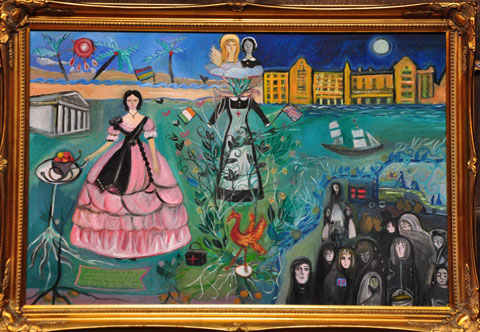 Liverpool artwork of the week 2010-31. ‘Agnes Jones: Past and Future’ by Alice Lenkiewicz in Noble Women at Liverpool Cathedral 2-27 August 2010.

The Lady Chapel was the first part of Liverpool Anglican Cathedral to be consecrated for worship and is 100 years old this year. Although probably bigger than most churches it can easily be missed by visitors as it is hidden away in a corner of the vast Cathedral. It’s a fascinating place with portrait windows of Noble Women on the West wall of the Chapel. Restored after the Second World War they show women from different areas of life, including some local heroes like Kitty Wilkinson – helper of the poor – and Agnes Jones – a devoted nurse – as well as nationally known figures such as Grace Darling, Elizabeth Fry and Elizabeth Barrett Browning.

These were all incredible, brave, pioneering, radical women whose stories need to be told so it is great that artist Alice Lenkiewicz who lives within walking distance of the Cathedral has chosen to paint 6 Noble Women and the works will be in the Chapel throughout August. The paintings are quite narrative but do not dwell too much on the darker side of the life these women had to tolerate rather showing their brightness, heroism and beauty.

“I decided to create a painting of Agnes Jones 1865 aged 33.
In this painting I wanted to show the contrast of past and future in the life of Agnes Jones.
The story of her life surprised me and I found myself creating a symbolic painting inspired by South American folklore painting.
”  Alice Lenkiewicz from her Noble Women Blog

Artwork of the Week 46