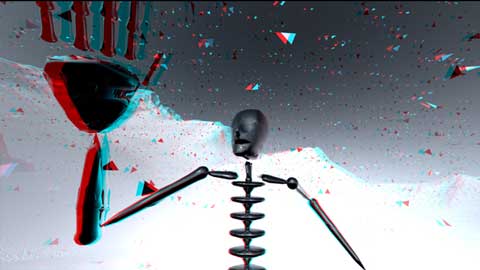 AL and AL have recently been announced as the winners of the 2009 Liverpool Art Prize. This is one of the new works they displayed in the exhibition. You can see the video on their website but you really need to watch it on a good screen in the gallery and wear the 3D glasses to get the proper effect.

‘I want to run in my mountains’ (2009)  features ‘Biped 00’ running through a shower of pink triangles high in the mountains as ‘Biped 01’ is measured and recorded in a motion tracking volume. The anaglyph video works have been commissioned for an exhibition in the city of Mechelen Belgium, the location from which the trains destined for Auschwitz departed. The pink triangle was the Nazi German symbol for homosexuals, many of whom were murdered by the regime. The scientific quest to measure, quantify and ultimately control human behaviour is mirrored in the reflective world of the Avatar series where AL and AL’s studio performances have been transformed into biped animations using motion tracking biometric technology.

Artwork of the Week – Nancy Davenport

Artwork of the Week – Dinky Toys

Artwork of the Week – Pair of espadrilles!