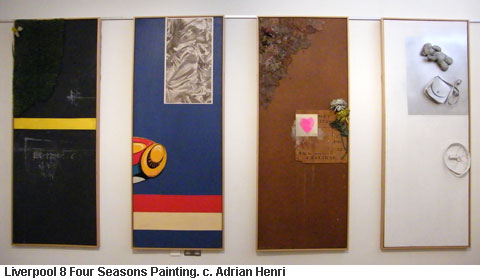 Liverpool artwork of the week 2009-34. ‘Liverpool 8 Four Seasons Painting’ by Adrian Henri in The Mersey Sound at University of Liverpool VGM, 8 May – 12 September 2009

Henri said ‘These paintings are in a sense abstracts but using elements of the landscape – like for example of the yellow lines. I love the quality of yellow lines on the road – the thickness – the gooeyness in the way it was put on.’

The exhibition, called Mersey Sound, will chart the development and sources of inspiration of Liverpool poets, Roger McGough, Brian Patten and the late Adrian Henri – writers who were central to the citys literary, music and visual arts scene of the 1960s.

Roger, Brian and Adrian became well-known in the 1960s by making poetry immediate and accessible to new audiences through joint anthologies such as The Mersey Sound (1967).  Selling more than one million copies, The Mersey Sound became one of the bestselling anthologies of poetry ever published.

Artwork of the Week – Glenn Brown

Artwork of the Week – Rebecca Key

Artwork of the Week – Michael Raedecker