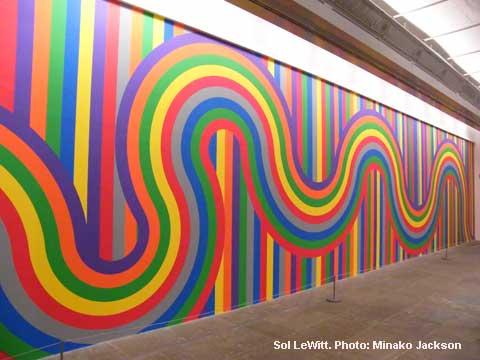 At Tate Liverpool the monumental and colourful Wall Drawing #1136 (2004)  spans the 22 metre long wall of the ground floor gallery.

A major wall drawing by influential American artist Sol LeWitt as part of the first UK tour of ARTIST ROOMS, a collection created by dealer and collector Anthony d’Offay and acquired by the nation in 2008. The concept was to devote one room to an artist and show simultaneously in galleries across the UK.

Sol LeWitt (1928-2007) was a pioneer of Conceptual Art and Minimalism. He believed “Ideas can be works of art; they are in a chain of development that may eventually find some form. All ideas need not be made physical”.

In 1969, he began to conceive guidelines for two-dimensional works drawn directly on the wall. Over 1,200 of his wall drawings have been executed so far, and his art continues to influence artists and fascinate audiences in various sites across the world.

Artwork of the Week – Monika Grzymala