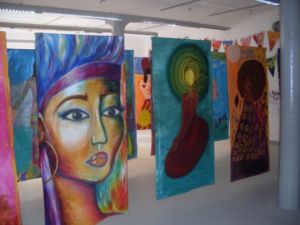 I have always been aware that the Tate Gallery has as a significant part of its brief to work with the local community. When it opened I was working in Liverpool 8 as a community librarian and did some interesting work with the education officer. As part of my community librarian work in the lead up years to the capital of culture I met and became best friends with the Clare Campbell who was contracted to be a creative health artist by the health and well being manager. Clare over a couple of decades has built up an international reputation of working with mainly women to build up their confidence to achieve dreams by drawing on amongst other things art, creativity and glitter. So when I heard that Clare was working with 100 local women to respond to the Marianne Faithful curated exhibition ‘Innocence and Experience ’ I was intrigued to see the results.

On entering Marianne’s exhibition on the 3rd floor my eye was caught by a folder where she had written her thoughts about some of the pieces in the exhibition. It was explained how she had lived on the streets in the early 70’s as a drug addict and anorexic. She was taken for occasional meals and sharing of friendship by the artist Francis Bacon. Amongst  the topics discussed was spirituality. This is clear in the selection of mainly paintings and photographs. There are photographs by Robert Mapplethorpe who was said by Marianne to be able to capture a person’s soul. A piece by Man Ray which is a metronome with an eye attached which is said to be the window in to the soul. To my delight there was RichaRD Dadd’s ‘The Fairy Feller’s Master Stroke’ painted while he was in a mental institution. I had this picture in my bedroom in the 70s and 80s. Plus there were two works by William Blake and I was impressed by their clarity of line, image and how they represented the theme of innocence and experience.

were the 3 videos Derek Jarman directed for her album Broken English. There were gripping fleeting scenes of unrest – nationally, internationally and from outer space.

Then down to the 2nd floor to see the exhibition ‘100 women create’ that had been devised by my friend Clare. I met and chatted with one of the 100 women who had participated in the workshops in the Tate in the previous week. Clearly she was delighted to be in there and have her picture displayed. I thought of Marianne’s story and how she had been befriended by the artist Francis Bacon in a non judgemental way. Clearly there were a wide range of women involved in the project. The main thrust of the exhibition were pictures on giant canvases or Tibetan style prayer flags. These were of the women themselves portrayed as
goddesses who liked Marianne have rescued themselves and show what powerful, creative people we all individually are.

In these materialistic times it was refreshing to see the spiritual aspect of upstairs reflected in this room. A pink fireplace decorated with bras donated by women around the world was set up as an altar to creativity and sparkling companionship.

It was a wonderful experience and well worth the visit. The artistic ability of the participants varied from the very experienced to those painting for the first time. However for me it was the overall experience of being with the 100 women’s creativity that struck home.

On the way back to the car I met again the same woman I was chatting to previously. She told me her story of how personal tragedy had left her motiveless but through attending Clare’s courses and in particular painting yourself as a goddess she was out in the world again being a creative, sparkling individual. I thought how proud Marianne would be to have a like minded soul exhibiting her painting in the Tate.

For a review of the Marianne Faithfull curated exhibition see Adam Scovell’s piece in the Art
Feasts section of this website – https://www.artinliverpool.com/?p=29576