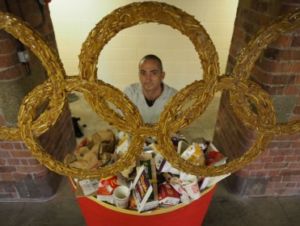 Deliverance is a poem I wrote, days after the Independent Panel released their evidential findings. I have printed the poem onto an old scroll, and made a Liverbird as the message carrier.

‘McRings’ invites the viewer to explore the interactions between publicly and privately funded events such as the Olympics, and asks them to examine the eventual economic returns and consequences, and who they favour.
Constructed from cooked and dehydrated french fries, and resin bonded into 5 hoops measuring 4 feet across in total, the golden ‘olympic rings’  sit atop a suitably scaled  ‘french fry’ holder.