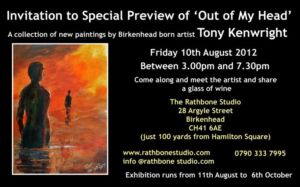 Award- winning press photographer Tony Kenwright has a new exhibition of images unveiled next month and there isn’t a single photograph amongst them. The show, ‘Outof My Head’, at the Rathbone Studio on Argyle Street showcases the eclectic nature of Tony’s paintings.  Featuring local scenes, portraits, imagined views and abstract expressionism has been completed over the past six months.

Tony worked as a press photographer at the Liverpool post & echo for over 25 years during which time he received numerous awards for his work but, since exchanging his camera for brushes, his work has found a new audience and attracted sales around the country mainly thanks to social networks like Facebook.

Tony’s whole career has involved images, whether as photographs or as fine art. After being a hobby artist he began to take his talent more seriously in the early 90s when he began creating works for commissions and selling paintings through local galleries.

Work pressures coupled with a young family led to art taking a back seat for almost a decade but in 2008 he quit press work to divide his time between running his own photography business and rebuilding his reputation as an artist.

He paints quickly, often mixing colours on the canvas to add vibrancy to his work and will often spread paint with the edge of a credit card rather than a brush. His choice of subject matter is unlimited but, as a photographer, he sees  no point in painting a photographic reproduction of a scene, preferring instead to bring his own visions and feelings into his work.

The exhibition at the Rathbone Studio that was opened as part of the empty shopsfund is Tony’s first ever major exhibition in his native Wirral. Gallery owner Janet Holmes say’s ‘the criteria of my studio to follow Harold Rathbone’s ethos of everyone is an individual is very much alive in Tony’s work, I am proud to be the first gallery to stage a full retrospective’.

The Treasures of Ancient Egypt come to Bootle