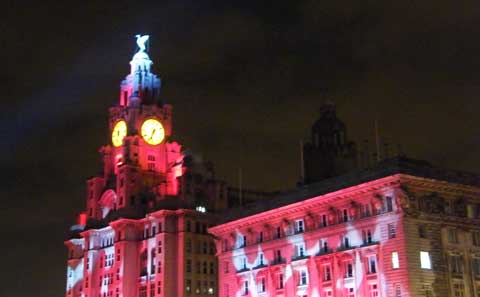 Saturday 10 January 2009 was another memorable evening in Liverpool to round off the Capital of Culture year, one year on from the launch event in Lime Street. This ‘Transition’ People’s Celebration took place at the Pier Head with fireworks on the Mersey.

It was good that we got there very early so we had a good view of both the fireworks and the 3 graces as well as the screen on the side of the still-to-be-completed Liverpool Museum but this came at the cost of being frozen for 3 hours.

The lanterns on and around the new canal were quite simple but effective and the illumination of the Liver Building was something you don’t see very often.

The recital of the 800 line Liverpool saga was a bit slow for my liking but I thought the video of Liverpool’s history and highlights from 2008 was quite good and having a singalong to ‘All Together Now’ was a nice touch. Some commentary would have helped, we had more information than most people (via the press release) but still missed the significance of a few things.

I can never get really enthusiastic about fireworks but they were good and fitted well to the music which was the usual mix of old Liverpool sounds (would have been nice to add some from the current century at least).

Earlier we had been to Novas CUC where there was face painting, DJ workshops and other fun stuff, I believe Tate was packed out but we didn’t get there. We saw a few street performers including young people dancing with cardboard boxes, lots of drumming from Batala and the Samba School, an artist wearing a wolf mask and ended up at the Bluecoat (also packed out) in time to see a great live gig from Steve Pilgrim and his band. You Had to be There