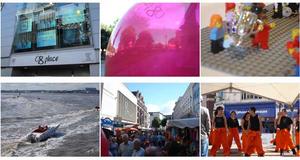 So yesterday was August 20th, i.e. 20/08, i.e. ‘A Date to Celebrate’. There were lots of events and attractions going on so I was out early and started by taking a look at the new ’08 Place’ in Whitechapel.
“The 08 Place will provide information on events in the city, how to get involved in the Capital of Culture programme and stock a full range of official and licensed merchandise.”
Apart from the merchandise (which local businesses are rightly unhappy about) there’s not a lot here but I suppose it will grow as time goes on. What I keep wondering is what its going to be called after 2008? Surely it won’t still be called the 08 Place in 2013? And what about liverpool08.com? Its bound to get renamed eventually and we’ll have to change all our bookmarks.
Anyway, got a free balloon and moved on, hoping to go to the top of St Johns Beacon but it was booked up for the whole day so moved on to the Walker to take another look at the Lego art. Here’s Steve Gerrard holding up the European Cup. Picked up a free gift (bar of chocolate) from the Museum and hired a DVD for free from Central Library.
Took a quick look at the Honda Power Boat races on the Mersey before buying olives from the Continental market in Lord St. There was a fashion show of sorts on the Church St. podium but the dancers were just rehearsing (badly) as I was going past, I wasn’t going to hang around. Too late to join the Kids Treasure Trail at FACT and I’m over age anyway (just) so took a quick tour of some of the Studios at Arena which were open for the day, first time I’d seen them.
It was only lunchtime now but I’d had enough, there were a lot more things I could have seen or done. As you can see from that list it was all minor stuff it probably went completely unnoticed by most people but I’m not negative about it. Its better than nothing and will probably grow each year.

Paradise Stories and Other 2008 Events