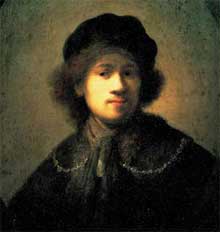 ‘Self-portrait as a Young Man’, by Rembrandt van Rijn

About the artwork
This year is the 400th anniversary of the birth of Rembrandt Harmenszoon van Rijn (1606-1669) in the Dutch university town of Leiden, where his father was a miller. Rembrandt became one of the most celebrated European artists. His contemporaries admired his printmaking and portraiture. Later artists and collectors praised the compassionate humanity and psychological realism of his images, drawn from the Bible and ancient mythology, and above all his series of often profound self-portraits, of which he painted more than any other artist of his time.

The Walker Art Gallery’s ‘Self-portrait as a Young Man’ is one of the best documented of Rembrandt’s self-portraits. Although it is not dated we know fairly well when it was painted, between 1629-31, who first owned it and even under what circumstances and for whom it might have been commissioned. Rarely is there this amount of documented information for the other 80 or more self-portraits that Rembrandt produced in painted and print form over the course of his life.

Calderstones Park and the Woolton Outhouse

The Gallery at The Peoples Centre