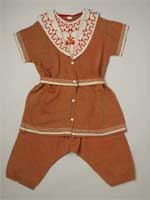 Emily Margaret Tinne (1886-1966) married Philip Frederic Tinne on 14 July 1910 at the Presbyterian Church, Toxteth Park, Liverpool. They honeymooned in Ireland, at Culdaff, County Donegal, where Philip’s father, John Ernest Tinne owned a house. This later became the setting for many happy family holidays with their children.

Emily, like most women at that time, would have put together a trousseau, or collection of clothes and linen, before her marriage. It included this wonderful bathing costume, bathing cap and pair of espadrilles.

The two-piece bathing costume is made from wool serge, a rather scratchy fabric that was probably very heavy and uncomfortable to wear when wet. It is embroidered around the buttoned-in bib-front and sailor collar with a scrolling design, a Greek key pattern, and a pair of crossed anchors in red wool. The baggy, knee-length bathing knickers fasten with a drawerstring at the waist. Emily bought this outfit from L.Y. & J. Nathan, who were based at 4 Hardman Street, Liverpool. Lewin Yates and Jane Nathan appear in the Liverpool street directories as ‘Shirtmakers, Hosiers and Clerical Outfitters’ from the 1860s until the early 1940s, but they also, quite oddly, appear to have sold swimwear too.

European Capital of Culture 2010 is…

Made In Liverpool 06 – Reminder