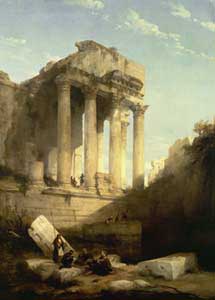 ‘Baalbec – Ruins of the Temple of Bacchus’, by David Roberts

About the artwork
David Roberts went to Baalbek in 1839 in the course of a tour of the Middle East. Roberts wrote in his diary 4th. May 1839: ‘have begun my studies of the temple, of the magnificence of which it is impossible to convey any idea, either by pencil or pen. The beauty of its form, the exquisite richness of its ornament, and the vast magnitude of its dimensions are altogether unparalleled.’

He spent several days drawing the temple ruins from all angles, these drawings became the basis of no less than eighteen oil paintings.

This picture, originally and incorrectly titled Baalbec, Ruins of the Temple of the Sun, presents a dramatic scene of classical grandeur, illuminated by bright sunlight, complemented by a large area of deep shade. The dramatic scene is enhanced by the three groups of figures, dwarfed by the massive scale of the ruined temple.

The figures in the foreground are being served refreshments and waited on by an African servant or slave.

Roberts’ tour of the Middle East lasted eleven months, during which time he completed hundreds of drawings which were reproduced as lithographs, published between 1842 and 1849 in six volumes with the title, The Holy Land, Syria, Idumea, Arabia, Egypt & Nubia. These albums made his fortune.

REALISE your right to art

‘The Liverpool Kiss’ at 08 Place