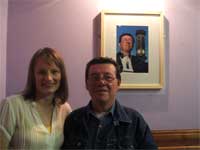 On Thursday I went to a Private Viewing at the Casa Bistro, 29 Hope St. I don’t think there’s been an exhibition as such there before and this is Tabitha Jussa’s first solo show. Called ‘Turning Tides: A Study of Life on the River Mersey’, the Casa is an appropriate place as the Bar/Bistro is run by a group of former Liverpool dockers who lost their jobs after a long and famous dispute in 1998. Some of the photographs are in the upstairs bar but most are in the bistro downstairs. There’s some interesting images of people and places on the river, there’s also a video. Tabitha explains…

“Turning Tides is an insight into the lives of people who have been and are affected by the River Mersey. My starting point was to explore the emotions conjured up by disembarking at the Liverpool waterfront – how it must have felt to see the ‘Three Graces’ upon returning from an arduous sea voyage; the welcoming sight of the New Brighton lighthouse; the six sided clock tower and the liver birds.
As I researched the project it evolved into something more than just disembarking – it became more about the river and the people using it. I photographed many different people at work on the river, as well as people who worked on the river in the past. Alongside the photographs of the people a film was also produced with interviews about the emotional draws of the river and its effect on them.
It has been a very enjoyable project for me to be involved in – not only have I met fantastic people, but I have also pushed myself to produce and manage the project single handed. This has resulted in a desire to continue with community based projects and to delve further into the cultural riches that are so plentiful in Liverpool.”

The project was funded by the Culture Company as part of ‘Around the City in 80 days.’
Unfortunately the place is closed for renovation until Jan 26th but the exhibition continues until February 16th 2006.

Tour of The Blackie

There’s a Meadow in the Museum

Lamb Banana to Return to Garston

Flagging Down May Day – Sefton Park