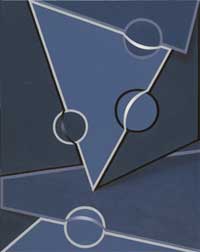 Yes, I’m still catching up on old news. I really like what I have seen of Tomma Abts work. Looking forward to next year’s Turner Prize being hosted in Liverpool

Tomma Abts’s paintings are the result of a rigorous working method that pitches the rational against the intuitive. She works consistently to a format of 48 x 38 centimetres in acrylic and oil paint. She uses no source material and begins with no preconceived idea of the final result. Instead, her paintings take shape through a gradual process of layering and accrual. As the internal logic of each composition unfolds forms are defined, buried and rediscovered until the painting becomes ‘congruent with itself’.

Abts describes the finished works as ‘a concentrate of the many paintings underneath’, each functioning as an autonomous object revealing the visible traces of its construction.

A Bit of Zap Graffiti

‘ReNew06: A Collaboration’ at JMU