Captivated at the Potting Shed …

Walk the Plank, a theatre production company on a boat, has staged three events each known as the Potting Shed with separate themes. On the final night of these events (Friday 17 March 2006) , there was an array of performances by different artists, singers and performers. Two in particular Gaynor Evelyn Sweeney and George Lund bemused and enticed the audience with their individual, unique and thought provoking conceptual performances.

Gaynor Evelyn Sweeney presented ‘The Enlightenment – Les Cushion Belles (Part III)’. A performance derived from poem, ‘Les Cushion Belle’ by the artist, writer and philosopher Kofi Fosu based in New York. The poem was attributed to the women he has creative and intellectual dialogue with on the subjects of gender, ethnic and sexual politics in post modern society. The performance artist, Gaynor Evelyn Sweeney, created a live intervention relative to the philosophical discourse between the two artists. The concept of the performance was adapted in context for Walk the Plank and variations previously explored at the Walker Art Gallery (Liverpool), 340 Old Street Gallery (London), the Liverpool Biennial and New York.

From the onset of the performance, Sweeney captivated her audience and even in the event of all the technical equipment failing, including digital projection and sound, which accompanies the live performance; she persisted and continued with the actions that imbue the concepts of the shared philosophies of her and Fosu. The audience was fixated as she moved between each integral stage of the performance. Dressed in men’s attire she removed the tie, rolled it up and put it into her pocket. She gradually unbuttoned the shirt to reveal her torso. Unzipping her trousers she pulled out a red lipstick and repeatedly went over her lips until exaggerated. From her lips she traced the lipstick down her chin, neck and wrote on her body ‘Woman created by Man born of Woman’. She removed the shirt and covered her head, securing it around her neck. With the lipstick she redrew her lips, the crimson imperfection vaguely denoting the features of her own lips underneath. She stood motionless, arms outstretched, as if to greet, a crucifixion or defiance. Through this entire performance the silence pervaded the air, not a mutter, but the audience intensely engrossed in each action and movement made by the artist. She departed the stage to a rapture of applaud, but many in the audience, accustomed to theatrical productions and not the more conceptualisation embodiment of performance art. 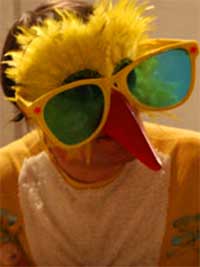 Then later on in the evening, George Lund entered with his antics and eccentricities as the Funkadelic Chicken. He danced and juggled, exposed his back side (one stitched to his chicken costume). This flamboyant and energetic character, his alter ego, a manifestation from his paintings and philosophical text of ‘Animal Utopia’. The performance and the persona one embryonic, a parody in dance and egg juggling, etc., enveloped in the satire and idiosyncrasy. Yet, we are greeted not by a jester, indeed no fool, but realise the revelry of the Funkadelic Chicken, as he struts through each move, arms flaying, legs kicking, intermittent squawks and scratching of feet; each action one to attainr the euphoria and the utopia we each so avoid in our daily conventional lives. The fundamentals of Lund’s artistic interventions overall, whether his writings, paintings or performances. He closed his performance on a crescendo of applause and laughing, not at him, but with him, as he touches on the aspiration for the ideal in each of us!

Two very distinctly different performances by Sweeney and Lund and each as provocative and bewildering to the audience! An exceptional evening!

Is It a Drawing or A Painting? Discuss