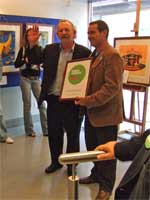 Another week, another Alex Corina launch. You have to admire his energy and commitment. The space in the 08 Place reserved for short exhibitions is only small and there must be an awful lot of artists would like to have their work on show there. So, well done to Alex for getting the ‘Capital of Culture Series’ prints in there and having it launched by Jason Harborow (Chief Executive of the Liverpool Culture Company)

Officially this was the launch of the latest print in the series. ‘The Liverpool Kiss’ which Alex actually produced some time ago, also on display are the recently launched pictures by Chris Vine and some interesting new ones by commissioned local artist Jenny Dooley.

Cultural Ambassadors are all the rage now so Alex took the opportunity to promote the Garston Cultural Village by handing out badges to anyone prepared to say they will be an ‘ambassador’ and presenting Jason Harborow with a large print of the badge.

At 08 Place, Whitechapel for this week only (dates to be confirmed)

‘We Stopped at Perfect Days’ – Arena